At seven years, a typical Zimbabwean boy in the rural areas is expected to be playing with his age mates, running his parents’ errands here and there, getting  reprimanded for a misdemeanor or two. For Kurai, a seven-year-old boy in Manyengana Village, about 25 kilometers outside Mutare’s city, life has not been kind to him. Kurai’s eyes have seen what many adults do not wish to see in their entire life; his ears have heard what many of his age mates cannot comprehend, the first heartbreak he has ever experienced, and his soul has felt the dark days of his mother and his childhood. Kurai has been at the receiving end of a gender-based violence dispute between the two people who are supposed to be protecting him (his parents).

What started as a routine ZimRights verification exercise turned out to be an emotional experience as we descended into Manyengana Village. The Eastern Highlands’ scenic horizon is crudely broken with sights of charred buildings that make up Kurai’s homestead remains. “I’m frustrated by what my father and his brother are doing to my mother,” “…I was there when my father burned all our huts and dismantled the asbestos from the bedroom…” says Kurai as his voices trail off and his eyes stare vacantly into space, “…I asked him why he was doing it…”

Zimbabwe is battling with the scourge of gender-based violence that has worsened due to the Covid-19 induced lockdown. While it is acknowledged that both men and women have been at the receiving end of gender-based violence, the United Nations have recorded that its Zimbabwean GBV sub cluster partners have assisted 129, 220 individuals (51, 342 males and 77 878 females) from 1 January 2020. Kurai’s father, Titus, sadly falls into the category of perpetrators of this kind of violence. Several years after separation from Kurai’s mother, Sekai, Titus wanted her to vacate the homestead she had used for twenty-two years to make way for him and his new life. Having worked hard and contributed immensely to the home’s establishment and with nowhere to go, Sekai refused to vacate the home. Emboldened by the patriarchal system, Titus decided to spite Sekai by destroying the homestead.

According to the only witness, Kurai, Titus came to the homestead one of the days in September and asked to see the lobola list Sekai had left for him. Kurai handed the list to Titus; he got angry and started to vandalize the homestead. Titus began by tearing Sekai’s clothes, which were on the laundry line; using an axe, he broke down the doors of all the huts and cracked the wall of the cooking hut. He went away and promised to come back when Sekai was around. On his second return, Titus came while Sekai was dressing up; he asked Sekai to remove all the property from the bedroom hut as he wanted to remove the asbestos (roofing) from the house. Sekai challenged him on why he wanted to remove the roofing from what was her only home. Titus forcefully began to remove the asbestos. Titus, together with his little brother John started assaulting Sekai and accusing her of witchcraft. Sekai’s former husband told her that she was responsible for the incurable illness that had befallen him. John threatened Sekai with death and that; he would burn her alive if she refused to vacate the homestead.

Thanks to her job as the  officer of the community court, Sekai had attended several human rights educational workshops. Being aware of Zimbabwe’s laws that protect women from all forms of abuse, Sekai approached the community court and attempted to report the Zimbabwe Republic Police. For Sekai, she had to make a difficult choice, between putting food in her son’s plate and spending nemurous days traveling to the city centre of Mutare to access the Police.

This ordeal is not only perculiar to Sekai but to many Zimbabweans. In 1981, Zimbabwe ratified the Convention of Elimination of Violence Against Women (CEDAW), in which the government of Zimbabwe undertook to develop a legal framework which seeks to eliminate all froms of violence against women The government of Zimbabwe even went further to establish an independent constitutional commission. (Gender Commission) whose focus is to advance gender equality and develop a National Gender-Based Violence Strategy to eliminate all forms of gender-based violence. Reflecting on steps taken thus far, though much needs to be done, the State has committed to advancing women’s protection against discrimination and violence. However, women continue to be victimized and violated.

Regardless of the improved legal framework, there has been an  increase in  gender-based violence cases. Musasa Project said that the GBV cases during the Covid-19 induced lockdown increased by 70%. ZimRights community justice unit has interfaced with some victims of gender-based violence. Victims commended the measures taken to resolve and address the plight of women. Still, they emphasized the role of institutions, individuals, law enforcement agencies, families, and communities in perpetuating the continued violence and plight against women.

When we spoke to another victim of gender-based violence,give time and place and her name if she wants to be identified she said communities’ expectations and perspectives have further perpetuated her pain and suffering. “What had you done to agitate or frustrate your husband into assaulting you…” the police officer asked me.”. Narrating the events, she said, she was indirectly forced by the police officer to justify her husband’s actions, which was neither fair nor justifiable. “…Go back home and talk to your husband, involve the elders in need be before you approach us…” she quoted what the police officer told her. “..He didn’t even record my case..” she shared

ZimRights is deeply concerned with the continued violence against women and believes that the issue can be resolved by harmonizing the legal frameworks enacted to protect women and individual perceptions of citizens on the matter. ZimRights calls upon all citizens to  respect women and to play their part in ending social constructions causing the weavering of gender based violence within communities. The battle to end gender-based violence is not a responsibility of the State but all citizens. As Kofi Annan once said, “…Violence against women is perhaps the most shameful human rights violation. And it is perhaps the most pervasive. It knows no boundaries of geography, culture, or wealth. As long as it continues, we cannot claim to be making real progress towards equality, development, and peace..” Families must condemn gender-based violence and support the fight against it. Law enforcement agencies must enforce the law without favor or discrimination, and communities must refrain from patronizing victims of gender-based violence that dare to stand up against it .As we mark the 16days of Acivisim against gender based violence, I hope each and everyone of us play their part in ending GBV. 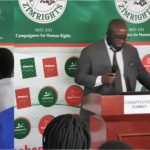