For the past 28 years, ZimRights has provided leadership in mobilising communities to shape the human rights agenda. The following are the highlights.

Following the signing of the GPA, ZimRights engaged the communities on the need to pursue a national healing agenda as envisaged by Article VII of the GPA. This process is captured in the documentary produced by ZimRights which premiered at the 2010 Zimbabwe International Film Festival (ZIFF) and scooped the Best Production Award at the same festival. The documentary influenced the constitutionalising of various transitional justice measures in Zimbabwe's 2013 Constitution including the establishment of the National Peace and Reconciliation Commission (NPRC).

The Road to the 2013 Constitution

In 2009, Zimbabwe’s major political parties signed the Global Political Agreement (GPA) and formed a coalition government whose main mandate was a constitutional reform process. Between 2009 and 2013, ZimRights mobilised its membership across the country to participate in the constitution making process influencing the content of the current Constitution.

Community Advocacy for Workers in Chiredzi

Between 2016 and 2018, ZimRights members in Chiredzi intervened in the dispute between a local sugar making company and its employees leading to the company agreeing to making adjustments to the working conditions of the employees. 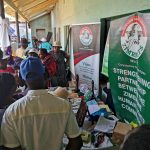