Rule of law and Accountability for Security Forces

Rule of law and Accountability for Security Forces

By Francisca Rumbidzai Zengwa
In Zimbabwe just, like in other African countries, we have witnessed the deployment of state security agents into the streets, a trend that has left civilians hugely vulnerable.

The current COVID-19 crisis, where governments have had to use the police and the army to deal with lockdowns, has exposed the brutality of African governments in enforcing the law.

State security agents have continually failed on their mandate to observe the rule of law in enforcing law and order, and have instead acted like they are above the law.

Since independence, civil society organisations recorded cases of state violence and human rights abuses and violations against citizens at the hands of members of the Zimbabwe National Army (ZNA), Zimbabwe Republic Police (ZRP).

In Zimbabwe, the history of human rights abuses perpetrated by security forces has been recorded and documented since the 1980s.

We have witnessed the Gukurahundi atrocities of the 1980s in Matabeleland, and these remains one of the worst forms of state-organised violence in the history of post independence Zimbabwe.

In 1998, the state unleashed the riot police and the army on food riots, which resulted in mass beatings, torture, and police brutality on unarmed civilians.

During Operation Murambatsvina, Action Aid International reported 27% of their documented reports being assaults in police custody, 43% of their reports being deaths or injuries resulting from police actions.

In the wake of the COVID-19 crisis, civil society organisations and other stakeholders, who carry on their shoulders a noble pursuit of the protection and promotion of human rights, have recorded several hundreds of cases of human rights abuses perpetrated by the army, policy and the state intelligence agents.

Whilst the government continues to discourage citizens from violating the national lockdown rules and regulations, the conduct by the security forces is intolerable and unacceptable. The have been mass incarceration of citizens, arbitrary arrests of citizens, discriminatory beatings of civilians, looting of tuckshops and in some cases deaths due to assaults.

The total disregard of the rule of law by the state security agents in performing their duties is worrisome and is a cause for grave concern.

COVID-19 has been just another excuse for human rights violations, and once again, the state has again been found at the fore front of human rights abuses. Insensitive to the struggles being faced by informal traders and vendors, the police have raided markets and burnt fresh produce of farmers.

In some instances police officer set police dogs off to the civilians who were found in breach of the national lockdown.

The Supreme Court in the case of Jestina Mukoko v The Attorney General Judgment No. SC11/12 emphasised that “No exceptional circumstances such as the seriousness of the crime the person is suspected of having committed, or the danger he or she is believed to pose to national security can justify infliction of Torture, or inhuman or degrading treatment.

The law under SI 83 of 2020 is clear regarding the penalty that can be level against any members of the public who are found in violation of the national lockdown. Section 11 provides for the following:

Regardless of the several calls on the security forces to exercise due care and compassion on citizens when enforcing the national lockdown, security forces have neglected and perpetuated other forms of punishment such as assaults against the prescribed promulgated.

It is utterly absurd that they require such as a reminder. The fights against COVID-19 have equally been a fight for human rights.

The rule of law must the religious observed.

A fight for human rights is a fight that has been ongoing, the fight against the deadly COVID-19 virus must not cause the state to regress from respecting human rights and freedoms.

Rumbidzai Francisca Zengwa is a Legal Practitioner. She coordinates ZimRights’ Community Justice Programme. Comments on this article can be send here or to: francisca@zimrights.org.zw 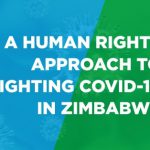 A Human Rights Approach to Fighting COVID-19 in Zimbabwe