The Zimbabwe Human Rights Association (ZimRights) notes with concern the attack by unknown people on ZINASU members who were addressing a press conference, journalist who were in attendance near Impala Car Rental premises and the subsequent arrest of Takudzwa Ngadziore the ZINASU president.

ZINASU members have been demanding answers from Impala Car Rental Offices in Harare on the role the company played in the abduction of a second-year journalism student at MSU, Tawanda Muchehiwa who was abducted and tortured by some unidentified individuals in Bulawayo on July 30, a day ahead of the much-anticipated #July31 anti-corruption protests.

Muchehiwa was found dumped three days later with severe injuries. CCTV footage has revealed that one of the cars used for the abduction had been hired from Impala Car Rentals.

The attackers, in plain clothes did not identify themselves when they got to the scene but started assaulting both the ZINASU members and journalist.

ZimRights reminds the attackers that the right to demonstrate and petition is enshrined in section 59. We also call upon the police to investigate and arrest the perpetrators. We strongly condemn the attack on ZINASU members and the arrest of Ngadziore who was also injured during the violence. We call on the security forces to release Ngadziore and arrest the perpetrators of violence. ZimRights deplores the attack on Journalist doing their work as freedom of expression and freedom of the media is enshrined in section 61.

ZimRights also calls upon Impala Car Rental to provide information and help expose those who are responsible for the abductions that have been taking place in the country. 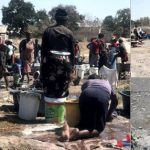 Press Statement On the occasion of the International Day of Peace