Prison Horror: Following the release of Godfrey Kurauone, Hopewell Chin’ono, Jacob Ngarivhume and Job Sikhala, the four have told horror stories of prison life. “It is meant for animals,” said Godfrey. “It is meant to break you,” said Jacob. They spoke about overcrowding, lack of ablution facilities, poor sanitation, and non-existent COVID-19 measures. This bring into focus the need for prison reform. ZimRights has donated sanitisers and masks to prisons in Harare, Gwanda, Mutare, Masvingo and Midlands in an effort to alleviate the situation. Without comprehensive reform, these remain just but a drop in the ocean. Listen to Godfrey Kurauone narrating his ordeal in prison.

On 24 August, three activists were arrested for protesting at the courts over the arrest of Job Sikhala. These were Terrence Manjengwa, Blessed Changara and Barnabas Gura. They are still languishing in prison after bail denial.

ZINASU president Takudzwa Ngadziore was arrested for the second time on 18 September for addressing a press statement 101 meters from Impala Car Rental demanding that Impala discloses information relating to the abduction of 22 year old Tawanda Muchehiwa. He is languishing in prison after bail has been denied. 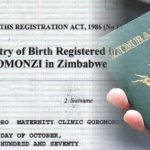