A year after the devastating Cyclone Idai, survivors in Masvingo still find themselves in the same position they were last year and have accused the government of channeling aid along political grounds.

In a community monitoring report released by ZimRights Masvingo province, several survivors have noted that they have not received aid from donors despite national leadership confirming that they have received donations for Cyclone Idai survivors. Recently, the African Development Bank has announced that it will be releasing USD24 million towards Cyclone Idai infrastructure recovery. Already concern has been raised of the need to put in place community monitoring mechanisms to ensure that whatever investiment goes to affected areas is not manipulated along political lines. In Masvingo, the worst affected areas include Bikita West, Bikita East, Gutu North, Masvingo North and Zaka East.

One of the survivors of Cyclone Idai reportat that it is worrying to note that deserving beneficiaries of aid from the local, regional, and international community, are not being accorded the opportunity to receive the assistance due to them as they are deemed to be not supporters of the ruling party, Zanu PF, whose government officials have taken over the full mandate of collating and distributing all forms of aid.

ZimRights continues to call for transparency and accountability in the distribution of any materials, aid, funds channeled towards the survivors of Cyclone Idai and further calls on law enforcement agencies and the Zimbabwe Anti-Corruption Commission to immediately investigate and prosecute people who are abusing aid for political mileage. 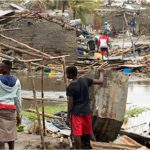