Some eight weeks ago, I assumed my new role at the Zimbabwe Human Rights Association (ZimRights) ZimRights is Zimbabwe’s oldest and largest indigenous grassroots movement. With over 200 000 members across the country, it is indeed a big family. It is an assignment that I embraced with a mixture of excitement and fear. That decision will definitely rank as the most difficult decision I have ever been asked to make. The call came at a time when I had begun to enjoy my comfort zone. I had built a solid team around me and generally, the future looked great while the impact was huge. I enjoyed many rewarding connections and satisfying assignments. But I was asked to drop all that and begin something else, in a potentially uncertain space. I was called to leave my old friends and the Forum and create new ones.

Eight weeks later, I reflect on why I made the decision I made. I am glad I made that decision because it gave me an opportunity to reflect on why I do the things I do. As I entered ZimRights House, I asked myself, ‘Why am I here?’ For many reasons, my decision did not make sense.

I decided to look for one of the founders of ZimRights, so they could cathechise me on the meaning of life at ZimRights House. In conversation with Mr. Paul Themba Nyathi, he narrates the story of activism that led to the birth of ZimRights. In our world that now abhors activism as some form of leprosy, with previously active NGOs now so professional, fancy and elite-minded, I realised that activism as a concept and practice is begging for redemption. And our fore-bearers have a story to tell.

PTN told me that ZimRights came into being at a time when the ruling party had succeeded in establishing a one party state. A few who included Reginald Matshaba Hove, Geofrey Nyarota and Nick Ndebele and others came together at Number 182 Samora Machel Avenue, the then office of the Zimbabwe Project headed by Judith Todd at the time. At that space, ZimRights the idea started gaining momentum. It was born because at a time when the tyranny of a one-party-state has established itself, it became necessary to build human rights consciousness in the ordinary people.

27 years later, the institution has grown from a few people in a small office to over 200 000 members across the country. It has become a symbol of community-driven human rights activism.

As I salute the founders of ZimRights, and my predecessors who carried the institution through thick and thin, perhaps my greatest rebirth in the last eight weeks is my reconciliation with the meaning of activism. The burning fire inside that refuses to sit back.

I come at a time when the concept of activism has become confusing and a subject of derision. Many of my friends who put on fancy suits look at me with a great level of contempt. Times without number, my colleagues in the Catholic community feel very uncomfortable when I introduce myself as a ‘human rights activist.’ A colleague in the same sector, after a bitter argument said to me, ‘The difference between you and I is that while I am a human rights lawyer, you are simply a human rights activist.’ He really thought he had reduced me. Being a learned lawyer is supposed to give us more satisfaction more than being action-oriented.

Another colleague asked me to introduce myself at a workshop, and I introduced myself as a ‘human rights activist’. He knew and respected me very well. But he clearly sympathised with me. He looked at me like I had lost my mind. His eyes were full of pain, wondering why I was reducing myself to a ‘mere activist.’ And he started to lecture to me why he thought I was not an activist.

‘I see you as a practitioner,’ he began, ‘I see you do a lot of work that helps people. Once you call yourself an activist, it evokes some demons which I do not think really describe you.’

I am many things, and indeed any of those fancy titles could stick. I have a fair amount of fine education and mentorship. But after many high level engagements where my identity as an activist has been questioned and ridiculed, I have never doubted of my true calling in this life. And joining ZimRights feels like me finally getting home, getting down to the real action that is missing from all our eloquent speeches and fancy reports.

When I think of activism, I think of how our world has evolved, not only out of the will of God that we become better, but out of sacrifices of many who answered his call to defy the world as it is in search of the world as it ought to be.

Under the tyranny of the status quo, it is easy to think there is no better world than this. “Why change things? The status quo is functioning.” This was the world during the time of slavery and slave trade when the world could not imagine an economy without slavery. They could not believe that it would be possible to set up a world order without free labour. And it took men and women of courage and imagination to revolt against that status quo which seemed well established and beyond question. It took the activism of people like Marcus Garvey to say we choose to see and fight for a different world.

At a time when colonialism and apartheid seemed normal and was revered as a blessing for Africa, it took a few men and women to stand up and say, it cannot continue like this. As Madiba was to later write in justifying the liberation movement in South Africa, ‘there is no moral goodness in using an ineffective weapon.’ Today, Madiba is often portrayed as a soft gentleman of feel good motivational speeches; an utter distortion of Madiba, the real champion activist who refused to sit back in the face of an atrocity and formed a formidable military movement in South Africa.

Even in biblical times, when the Pharisees and Sadducees believed they owned the law and knew the way of God, it took the Son of a carpenter to step forward and pronounce a new kingdom, a new law. “I came to bring fire on the earth, and how I wish it were already set ablaze!” (Luke12:49)

The Church today has engulfed the whole world because it refused to be bound to the comforts of the Upper Room. The activist Church of Peter and Paul refused to be bound to the pews by the beads of the rosary, but stepped out of the comfort and confronted the tyranny of the day with boldness and conviction. At a time when fear was the order of the day, it was safer to stay behind the closed doors, a few folks kicked open the doors and windows and defied the status in proclaiming a different world. Because their hearts where already ablaze with desire for a different world, they went in all directions, confronting death, and where need be, in pursuit of it.

When Martin Luther looked with the eye of the activist in his heart on the world, he rejected it as it was and stepped forward to announce a new dream. The dream of a world of equality.

He boldly declared, “I refuse to accept the view that mankind is so tragically bound to the starless midnight of racism and war, that the bright daybreak of peace and brotherhood can never become a reality.”

When Johan Galtung visited the then Rhodesia in 1963, and the white regime welcomed him and bragged to him that there was peace in the country – Johan says, “I looked at the way the society was organised. With 3% of the population controlling 93% of the resources, while 93% of the population was scrambling for 3% of the resources. I told them, ‘If this is your idea of peace, I don’t want it. Keep it.” A few years later, the protests started against the white regime.

There are countless examples, of times in our world, when the temptation to fit in was so powerful, and the seduction of silence was irresistible for the many among us. And indeed, many kept their silence. But today we remain eternally grateful for the few in their days but many in history, who stood up to defy the unjust order, and embraced a dream of a better world. To such men and women, we owe our lives today. The freedoms we have to worship. The dignity we have as black people. And the equal opportunities for women to excel. We do not take these for granted. And these are fruits of activism in the days before us.

And this is why Archbishop Fulton Sheen said, “Freedom is not an heirloom, but a life. Once received, it does not continue to exist without effort, like an old painting. As life must be nourished, defended, and preserved; so freedom must be repurchased in each generation.”

While our world has made many strides, today we still face many threats against human dignity. Against livelihoods. 4.5 million Zimbabweans have left the country to settle in foreign lands. And yet many continue to scramble for passports. Threats against life continue to increase. Our government’s greatest achievement is building state of the art mortuaries, while our hospitals are closed. Our maternity homes are empty, because women are being forced to give birth in archaic spaces without access to proper health care.

The call to defy this world as it is, and pursue voraciously a different world, is as strong today, as it was during the colonial era, when the back majority refused to live a day longer under the tyranny of racialism.

This is the call to activism. A call that transcends any fancy title or fancy qualification. And next time when I am called to find a fancy title: Legal Practitioner, Transitional Justice Expert, Peace Worker, Human Rights Researcher; I will still deny, because I am much much much more than these. These are mere tools I find in my training and experience. And yet at heart, I remain an Activist, because in this our world today, activism, as misunderstood as it is, it still matters. This is why I took up the task to serve at ZimRights. Because our world today, is desperate for people who are ready to defy the tyranny of silence in the face of grave injustices.

Dzikamai Bere is the National Director for Zimbabwe Human Rights Association (ZimRights). He writes his personal capacity. Comments can be send here or to dzikamai@zimrights.org.zw 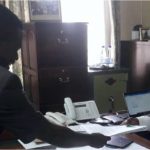